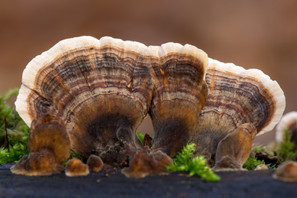 Turkey Tail Fungus is THE Medicinal Ally for Modern Humans

Turkey Tail Fungus is THE Medicinal Ally for Modern Humans

Trametes versicolor, more commonly known as (although not a true mushroom), is a widely prevalent mushroom throughout North America, Europe, and Central Asia. Any trip into the woods should award most novice mycologists a glimpse or two at this wonderful medicinal mycota. The prevalence of this mushroom is one of the reasons that I find Trametes versicolor to be the Number One ally for modern humans.

But there are two real reason why, after 10 years of studying medicinal mycology, that--like I said above--I just recently started to understand how powerful this fungus is, and how it is uniquely appropriate to be the Number One medicinal ally for modern humans.

While humans have been using mushrooms medicinally, probably, since the beginning of human existence, humans are facing today a unique set of circumstances never before experienced by us throughout our 45 thousand years spent on the earth walking upright and talking. This set of circumstances not only endangers our own ability to survive, living long, healthy, and happy lives, but directly affects the ability of our progeny to experience their birthright of living long, healthy, and happy lives. And this is where Turkey Tail mushrooms shine.

Trametes versicolor has been extensively studied for its ability to protect against and heal from breast cancer and prostate cancer. Specifically, Trametes versicolor has been researched and show to be active against endocrine receptor (estrogen or progesterone) positive breast cancer. Furthermore, as the understanding of prostate cancer progresses, more and more doctors and researchers are understanding the link between high levels of estrogen and prostate cancer in men. Trametes versicolor is also shown to be active against prostate cancer. Together, these estrogenic cancers account for many of cancers in Western humans, and Turkey Tail mushrooms show great promise in treatment and protection from these estrogenic cancers. By logical extension (although no research exists in this area) I also wonder of the ability that Turkey Tail mushrooms award in general protection from xeno-estrogen. Because they are so powerful specifically against estrogenic cancers, how does the Turkey Tail mushroom protect us all the time, not just in cases of cancer, again high levels of estrogen. While this research has not been done just yet, I am positive Turkey Tail mushrooms will shine.

Secondly, the reason I believe Turkey Tail mushrooms to be astutely appropriate for modern humans is for their ability to protect and heal the body from radiation. Even more so than plastics and the xeno-estrogens they break down into, our environment is completely saturated with radiation. Now I am not talking about radiation from nuclear bombs or power plants (or about the radiation positive seaweed being collected on the West Coast of the US or the doubling of radiation levels in seaweed in Japan ), I am talking about the radiation from our modern technologies which we willingly invite into our homes, and the radiation which provides those technologies with many of their functions, but which we have no control over. Take a drive down the highway, cellphone tower after cellphone tower after cellphone tower. Turn on your laptop, how many WIFI signals is it picking up? Then there are the cellphones in our pockets and the laptops on our--well--laps. We have no clue as to what extent this prevalence of radiation is going to wreak our health, and the health of future generations.