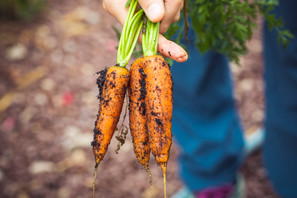 Can Carrots become a Junk Food?

This week's news piqued my interested in a slightly off-beat kind of way. Recapping, there is a new $15 million ad campaign to try and urge kids to eat more vegetables. But not just any vegetables, but baby carrots (baby carrots, as a side note, are processed-- shaven and formed--regular carrots, which are wrapped in plastic bags and then sold to consumers). The new add campaign urges kids to eat them "like junk food."

Ok, well despite my skepticism that they are nutritionally devoid, I would still much rather have people eating baby carrots than having them eat junk food. Especially when the majority of vegetables that Americans eat at French fries and catchup. Yes, this is true. Which brings me to the other news topic this week which grabbed my attention in a rather unusual way for the news to be grabbing my attention: the diabetes drug Avandia is being pulled of the shelves. In a way, these two news items are similar.

We have several health epidemics happening right now in the US, and one of the most tragic is diabetes, because here we have a very clear presentation of the public being misinformed about their health for the direct purpose of maximizing the profits of the medical/pharmaceutical industry. Patients are literally being made sick for profits, when the answers and the cure are free and right at our fingertips.

The body is amazing. We know this. One of the body's most remarkable capabilities is its ability to repair itself. Type 2 Diabetes, previously known as Adult Onset Diabetes, is a condition caused directly--and only--by the mistreatment of the body. Years of perpetual dietary abuse causes the body to throw up its hands and say "enough is enough, I'm just not going to go this anymore!"

When the body does this, you have Type 2 Diabetes.

Every time you eat something sweet (and this includes artificial sweeteners*) a message is sent to the pancreas to secrete a hormone called insulin. Each cell has little spots designed just for the insulin called Insulin Receptors, the insulin finds these little spots on the cells, and it signals to the cells to open up and store glucose. This is the body's way of dealing with the excess glucose in the blood, which left would cause tissue damage. The cells open, extra sugar goes in, and blood sugar stabilizes. Everything is fine.

This is a normal healthy process in the body. Trouble arises when there is too much sugar entering the body over an extended period of time. Eventually, the cells get tired, and when the insulin shows up to signal to the cells to allow excess glucose in, the cells say no. They become Insulin Resistant. This is why Type 2 Diabetes is also called Insulin Resistant Diabetes (in Type 1 Diabetes, the body does not produce adequate amounts of, or sometimes no, insulin.

People are then told they have to take a drug to control their blood sugar, and if they are lucky, urged to start eating less sugar. What they are not told is that the drugs are completely unnecessary and that their body can completely heal itself and once again become sensitive to insulin. Through diet and lifestyle changes, Type 2 Diabetes is completely reversible. Healing can, and will, occur.

However, medicine is a lucrative business, and drugs are expensive, so patients are kept in the dark. They are kept sick and uneducated.

This is the biggest tragedy of all.

When I hear of a drug for diabetes being recalled because it causes an increased risk for heart attacks I get so mad, because it demonstrates to us all, once again, the fallacy of the medical system, and the disgusting motivations and intentions behind that system. They are only interested in health so far as its a catch word for selling sickness and proliferating misinformation.

Unfortunately, health is a personal journey, one of self discovery and exploration, where we must become keen and critical knowledge seekers. A good place to start is distrusting the medical establishment (unless its for what they're good at, cutting out and sewing up). I say unfortunately because I would love for us all to live in a society which embraces our health on every front, from mental to physical, and even the meta-physical. Fortunately, however, I think that many people are becoming aware of this need, and they are moving in this direction--I know I am, and I know that I come into contact all the time with other people on a similar journey.

Remember, we don't need a $15 million ad campaign selling us devitalized carrots and we certainly don't need diabetes drugs. We need truthful information and we need intention which rests in the heart and not in the pocketbook.

*As a very interesting side note, artificial sweeteners like Splenda and Sweet-n-low cause weight gain. How can this be? Well, it happens in a rather direct indirect way. Like I mentioned above, the pancreas is signaled to secret insulin from the taste of sweet, not from the presence of sugar. There was a time during the human continuum when the taste of sweet and the presence of sugar were on and the same thing, but thanks to "Better Living Through Chemistry," they are not different any longer. Like we know, insulin causes excess blood sugar to be taken into the cells. But what happens when you have a insulin response to a false alarm (sweet taste but no sugar)? The insulin removes all the sugar from the blood, causing a huge drop of blood sugar, which we correct by eating carbohydrates--much more carbs then we would have consumed in the first place should we have had a sugar containing soda rather than a diet one.