Personally--and a little selfishly--I'm really excited about our new RAW Brassica Pollen. And I think that this is a pretty good reason to carry it at RAW Forest Foods. When we first started with our RAW Pine Pollen, we were in a similar position: we absolutely loved the product and wanted to share it with others. It was obvious to me that it was an important natural medicine and that it should be readily available. Similarly, I absolutely love our RAW Brassica Pollen, and I believe that it is an important herb for many men. I am pleased to be able to offer our RAW Brassica Pollen, as part of our greater line of RAW Pollens, through RAW Forest Foods.

Brassica Flowers: The Source of our RAW Brassica Pollen

Out of the three RAW Pollens we now carry at RAW Forest Foods ( Pine Pollen, Camellia sinensis Pollen, and now Brassica Pollen), RAW Brassica Pollen is the only Pollen who's traditional use is targeted at prostate health. According to the American Cancer Association, 1 in 6 men will be diagnosed with prostate cancer, 1 in 36 men will die of prostate cancer, and it is the second leading cause of cancer death in men. But as prevalent as prostate cancer is, most interesting to me are the high rates of benign prostatic hyperplasia (BPH), commonly diagnosed in men over 40. By the age of 60, 50% of men will have benign prostatic hyperplasia, and into their 80's, 90% of men will have an enlarged prostate.

Nettle root extracts been shown time and time again (see this placebo-controlled double blind study for more information) to relieve the symptoms of enlarged prostate, which may include (Mayo Clinic):

In a study of 2,115 men between the ages of 40 and 79, symptoms of prostate enlargement correlated to sexual dysfunction in the men. Researchers wrote, "As the men's urinary symptoms increased, their level of sexual function decreased." The relationship between BHP and sexual dysfunction was most dramatic in younger men.

According to the study, "urinary tract symptoms resulting from an enlarged prostate that were most strongly associated with sexual dysfunction were:

These symptoms were associated with:

In my experience, it seems that more and more men are experiencing some degree of benign prostatic hyperplasia (BPH), and they are doing so at earlier and earlier ages. Sedentary lifestyles and/or poor dietary choices (as well as genetics) seem to cause or exacerbate prostate issues. Holistic doctors are increasingly drawing connections between sedentary lifestyles, particularly too much sitting, to prostate issues, as well as establishing connections between our hyper-sexualized culture and rising prostate issues in men.

The Androgen/Testosterone Loop of the Male Body 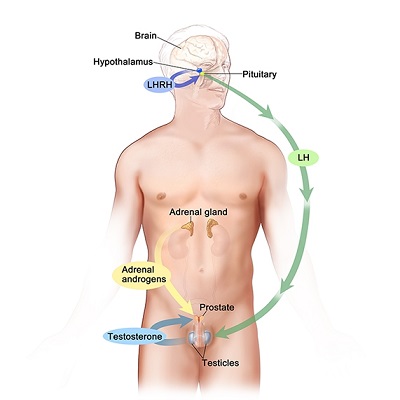 At RAW Forest Foods, we have been drawing the connection between estrogen and prostate issues since our start, and have been pleased to offer several products (including our Nettle Root Extracts (both our powdered 50:1 extract and our standardized Beta-Sitosterol Capsules), Pine Pollen and our own Estrogen Detox) to promote prostate health, but we never had something that seemed to directly feed the prostate with the nutrition it needs to stay healthy. I don't like the common medical standard (allopathic and common to Western herbalism as well) of waiting for problems to arise to then treat the symptoms, so I wanted to find something that supports prostate health rather than to try and reverse or relieve the symptoms of prostate issues.

I have a family history of prostate cancer, and when I had my genome mapped, I discovered that I have a pretty relevant increased risk of prostate cancer over the general population. As I said in the beginning of this post, I am personally, and selfishly, really excited about our new RAW Brassica Pollen, and this is because of its unique use in promoting prostate health (rather than treating symptoms of an enlarged prostate). I think that in the world we live in, managing prostate health is a concern for every man, and with my predisposition towards prostate cancer, managing my prostate health is of particular concern. I've been using our RAW Brassica Pollen daily and love it.

RAW Brassica Pollen seems to feed the prostate with the amino acids, vitamins, and minerals it needs to promote wellness. RAW Brassica Pollen has been shown to be exceptionally anti-inflammatory, which benefits an enlarged prostate. But, while a lot of research has been done into establishing that Brassica Pollen benefits the prostate, the actually action of how it does so is still unknown. As with many herbs, it is my guess that while the connection of the benefit is established, the actual pathway may remain unknown--and that's OK with me.