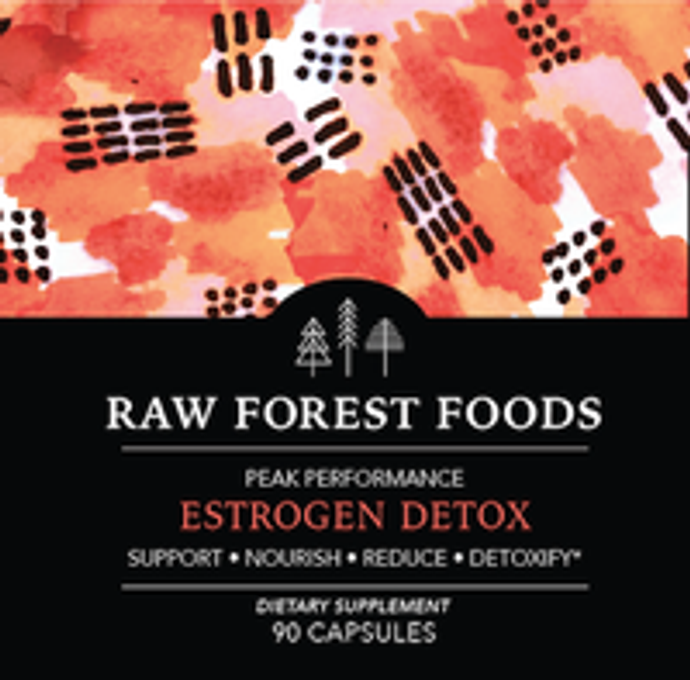 This new formula is designed to not only offer more complete estrogen detoxification, but offers more protection and repair during the course of detoxification.

We are very excited to be able to share our new Peak Performance Estrogen Detox with you--our RAW Forest Foods family, friends, and customers.

Estrogen Detox was originally introduced because customers were asking us for product recommendations to help them eliminate estrogen and to combat estrogen dominance/toxicity.

At the time, there was no holistic, comprehensive, and thus effective formula on the market which we felt could benefit our customers and be worthy of a recommendation. So we crafted and produced Estrogen Detox. Several years have passes since the release of the original formula and we have more to bring to the table now.

In our opinion, there is still no rival on the market (and we have looked at them all) to our original formula, but we knew that we could still offer you something better--with increased detoxification and increased support of the body. And is is exactly what we are doing with our Peak Performance Estrogen Detox.

The foundation of the new formula remains the same as the old. We did not want to mess (too much) with a good thing. Additionally, we are keeping the price the same and each bottle still includes a full detoxification protocol (increasing the capsule count from 60 to 90).

To the original, above formula, we have added the following:

These additional ingredients have been selected because of their unique estrogen detoxification abilities, their abilities in reducing the production of harmful estrogen metabolites in the body, and for their important broad-spectrum protective effects upon the body.

In all, Peak Performance Estrogen Detox is designed with three goals:

We formulated this product to offer unmatched estrogen elimination and detoxification.

An In-depth Look at the Ingredients

This new formula has been designed to reinforce the original objective of the formula, achieving the same goals but doing it better. Here is a closer look at the ingredients:

Promotes estrogen detoxification through the inhibition of beta-glucuronidase (a naturally occurring enzyme). This allows the body to release estrogen (and other hormones) before they become reabsorbed. One study showed a 23% drop in estrogen levels after oral administration of Calcium d-Glucarate.

Calcium d-Glucarate has also shown beneficial effects against for breast, liver, and skin cancer, and it has demonstrated important lipid-lowering properties.


Targeted use: Estrogen elimination and detoxification

Apigenin (5,7-dyhydroxy flavones) is present in the herb chamomile ( Matricara recutita). Apigenin is a potent estrogen-metabolizing compound, meaning that it helps break down and eliminate estrogen from the body. Apigenin is also an estrogen receptor antagonist, blocking estrogen receptors in the body, and it is anti-aromatase. Additionally, apigenin helps to reduce oxidative stress on the body.

DIM (3,3'-Diindolylmethane) is a plant phyto-chemical present in cruciferous vegetables (cabbage, broccoli, Brussels sprouts, cauliflower, et cetera). DIM has been shown to increase estrogen metabolism (detoxification) and is considered to be a promising compound in the treatment of certain estrogen driven cancers, including some thyroid cancer, ovarian cancer, breast cancer, and prostate cancer.

Indole-3-carbinol is found naturally in cruciferous vegetables (as is DIM) and has been shown to detoxify estrogen from the body by dramatically increasing urinary estrogen output after supplementation. Research indicates that indole-3-carbinol prevents the growth of some estrogen-driven.

Possibly one of the most research and important plants for promoting effective detoxification and liver health, Milk Thistle Seed promotes healthy liver function and protects the liver during detoxification. Silymarin (the active compound in Milk Thistle Seed) is an important part of our Estrogen Detox protocol, protecting the body while estrogen is released and promoting liver health to decrease future estrogen dominance.

Together, Milk Thistle Seed and Sulforaphane aid the body in actually eliminating the estrogen that is released by the above compounds Calcium d-Glucarate, Apigenin, DIM, and Indole-3-carbinol. Effective detoxification has to include ingredients with both release stored toxins and support the body in the removal of those toxins. Otherwise you're simply sweeping dust under the rug. Metaphorically speaking, Milk Thistle Seed and Sulforaphane takes the trash out.

Targeted use: Anti-aromatase (blocking the conversion of testosterone to estrogen)

Chrysin is considered to be one of the strongest anti-aromatase compounds known. It is a flavonoid extracted from the passionflower plant ( Passiflora caerulea and Passiflora incarnate) In addition to its anti-aromatase effects, for blocking estrogen receptors, to benefit the male reproductive system, and for anti-inflammatory and cognitive benefits (COX-2 inhibition).

Targeted use: Anti-aromatase (blocking the conversion of testosterone to estrogen)

Beta-Sitosterol, as found in Stinging Nettle ( Urtica dioica) Root, is considered one of the most important medicinal herbs for men. Beta-Sitosterol has been extensively studied for the benefits it offers the male reproductive system, in particular promoting prostate health and effectively relieving the symptoms of benign prostatic hyperplasia (BPH). While the specific method of action of Beta-Sitosterol is unknown, many suspect that is works by blocking the conversion of testosterone to estradiol through the aromatase pathway.

Citrus bioflavonoids support and protect the body and have been shown to demonstrate broad anticancer, anti-inflammatory, and cardiovascular protective benefits.

Citrus bioflavonoids are included in the formula to assist the body during estrogen detoxification, the release of stored estrogen, and to help heal the body from the harmful effects of estrogen dominance.

Camellia sinensis is the Latin name of the plant that provides us tea: white tea, green tea, oolong, black, and puh'er.

We include Green Tea Extract, which is high in the important catechin Epigallocatechin gallate (EGCG), because of the broad spectrum of protective effects it exerts on the body, including possible protection against prostate and breast cancer, anti-inflammatory effects, and anti-oxidant effects. Green Tea Extract has also been shown to dramatically increase the anti-estrogenic / anti-aromatase properties of Chrysin.


Selenium in included in our Peak Performance Estrogen Detox Selenium is a powerful antioxidant, a cofactor to glutathione peroxidase, and is mineral that found naturally in the soil, water, and some foods. Selenium is an essential nutrient (it must be consumed and cannot be produced by the body).

Selenium supports the immune system, has been shown to help regulate thyroid function, and it has been associated with a reduced risk of prostate and breast cancers.