5 customers are viewing this product

One of the first medicinal mushrooms we introduced at RAW Forest Foods, our Turkey Tail Extract is made using only select wild-harvested Turkey Tail, Trametes versicolor, fungi from strict ecological sources. Our Cloud Mushroom Turkey Tail Extract has been standardized to contain a 40% concentration of the medicinal polysaccharides present in this fungi, including the clinically relevant and researched compounds PSK, PSP, and VPS. Turkey Tail is a particularly useful medicinal mushroom in helping to protect and guard against the increased rates of certain diseases prevalent in modern society.

This is an ideal herb for men and women, but especially women looking for an adaptogenic fungi to promote immune system health and possible breast cancer support.

What Others Are Saying 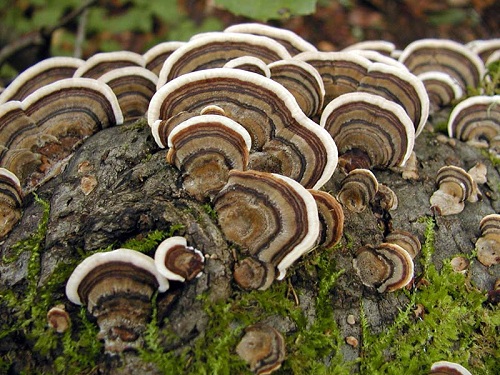 "I am a primary care physician, working primarily with the pediatrics population, and I am routinely exposed to different pathogens, including the onslaught of seasons colds which come walking through my door this time of the year. I have used several products from RAW Forest Foods, and have always been more than satisfied with the quality of their products, but I want to give a specific mention to the immune support that Trametes versicolor (Turkey Tail) has awarded me over the course of approximately 1.5 years of continual use. I do not tend to be a sick person, but I usually end up catching a cold several times a year--similar to the elementary school teacher and her exposure to the common cold. Since starting and using Trametes versicolor I have not been sick once. Not even felt any sickness coming on. This has added greatly to the quality of my work and my life, and I am tremendously grateful to that. If I could recommended a natural product through my work I would, without a doubt. recommend this. But alas, it is out of the scope of medicine." — Michelle

You will find our Turkey Tail Extract in the following product:

The largest US clinical trial on Turkey Tail was performed by Bastyr University, which confirmed the use of Turkey Tail mushrooms in the treatment of several kinds of cancer, including cervical, breast, lung, gastric, colon, sarcoma, carcinoma, and esophageal. The same study confirmed the use of Turkey Tail in cases of immunodeficiency, hepatitis B and C, and malaria. In addition to having immunomodulating and anticancer abilities, Turkey Tail has also shown an ability to fight viruses, which is a highly sought after ability in modern medicine.

Folklore remedies of Turkey Tail include the treatment of lung and liver infections. In China, Turkey Tail has been used as a preventive and curative agent for liver infections and liver cancer. In Japan, it is considered a panacea for a variety of cancers. Overall, the mycelium and fruiting body of the mushroom is considered an immune stimulant and is believed to have anticarcinogenic activity.

In Traditional and Classical Chinese Medicine, Turkey Tail, also known as Yun Zhi, is seen to manifest its therapeutic actions in the Spleen, Lung, and Liver meridians.
It does so by invigorating the Spleen and eliminating dampness, replenishing Jing and Qi, all through its use as a general tonic and in regulating immune functions.

Ethically and ecologically wild-harvested to ensure a clean product and the preservation of ecology.

RAW Forest Foods offers bulk, 70 gram pouches of Turkey Tail Extract Powder, with 35 servings (2 grams per serving) per pouch. As with all of our products, we source our ingredients as close to the produces—farms and forests—as possible, visiting sites and meeting with growers, wild-harvesters, and processors. 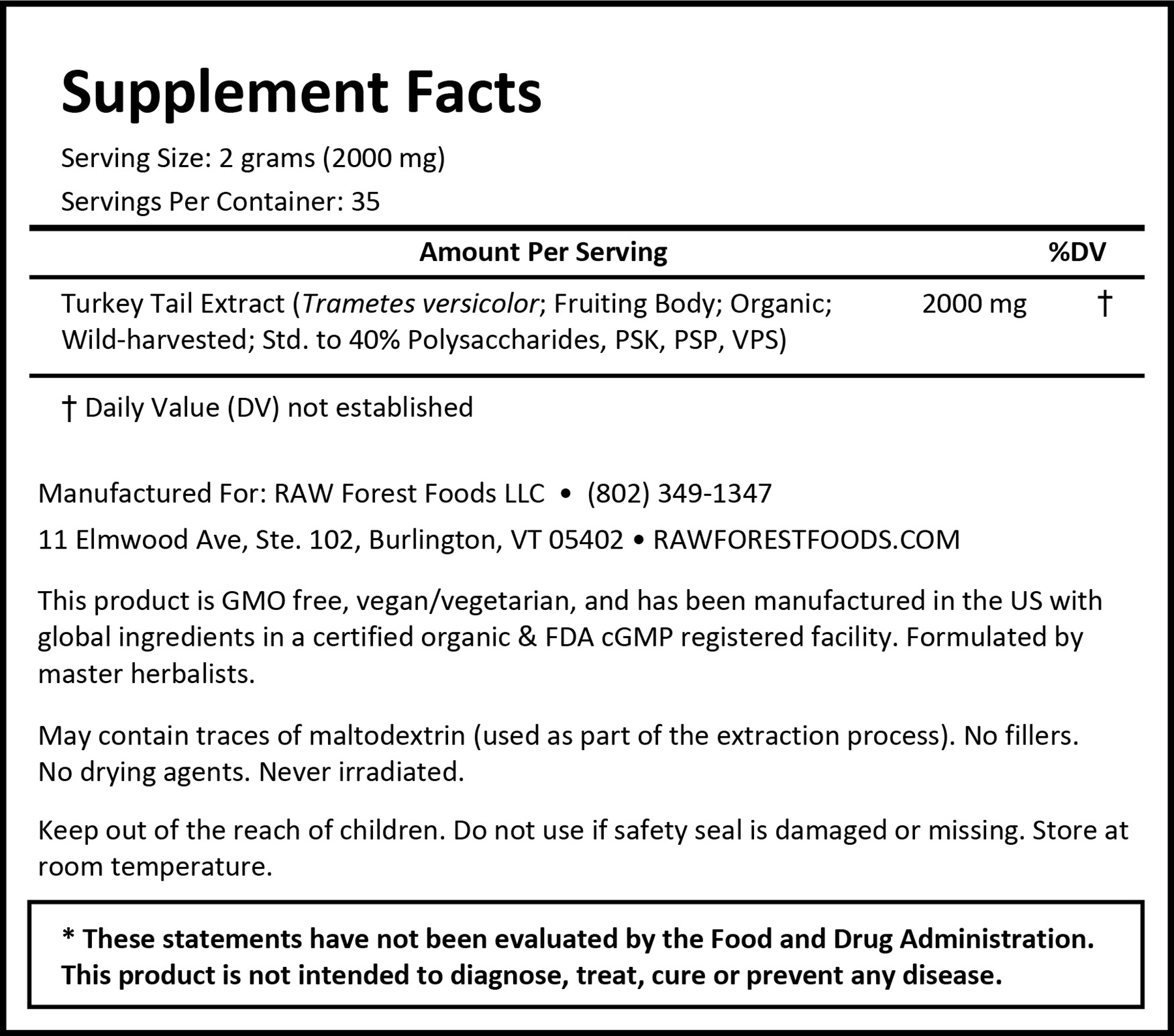 Serving size is 2 grams (approximately 1/2 teaspoon), taken twice daily or as directed, preferably on an empty stomach. Once in the morning and once in the evening.

We like to take our tinctures diluted in 2 - 4 ounces of warm water, taken on an empty stomach.

Learn more about using all of our products here.

A cool, dry place, away from sunlight and moisture.

Herb cycling schedules can be beneficial when healing. If you prefer to rotate your pro-androgenic and tonic herbs, we suggest a schedule of five days on, and two days off, or four weeks on and one week off.

Before starting any new medicinal herbs or nutritional supplements (from our company or otherwise), customers should consult with their qualified healthcare practitioner. This not because we question the safety of our products, but because we believe in the strength of our products and that plants have a medicinal, therapeutic potential.

This product is not for use by those under the age of 18, who are pregnant or nursing, or who are allergic or adverse to any of the ingredients contained within.

* These statements have not been evaluated by the Food and Drug Administration. This product is not intended to diagnose, treat, cure, or prevent any disease.

Please consult our full Terms and Conditions for more information

Your order will ship—barring the very rare occurrence—within one business day.

For details, including important information on international orders, read through our Shipping page.

We love our products and we want you to order with confidence, which is why we offer a 60 day full-refund on all items purchased through our website.

Visit our Returns, Replacements, and Cancellations page for additional information.

Founded in 2010, RAW Forest Foods is the first source for RAW Pine Pollen™ and Pine Pollen Tincture. We've been here the longest, and we're not going anywhere. With that experience comes authority and expertise, from unique formulations to clean sourcing to innovative manufacturing.

Master Formulations and the Art and Science of Herbal Medicine

We believe that plants are medicine, and to safely unlock their potential, they need to be formulated with the reverence and respect they deserve.

We don’t offer blends at RAW Forest Foods. We work with our master, professional herbalists to produce actual formulas. Formulas that work and are formulas that are crafted for our customers.

Commitment to quality doesn’t end with sourcing. We take the same love we have for the plants and the medicine and apply it to our manufacturing. All manufacturing is done right here in the US, with full FDA compliance.

Be Part of the Trail Family

RAW Forest Foods is a small business, which allows us to pay close attention to detail, and when you purchase from RAW Forest Foods, you’re purchasing from real people who really care. About our products, about our business, and about our customers—the trail family.

We are excited about our products and we know you are, too, which is why we ship fast. Orders leave our warehouse within 1 business day, and orders of $49.99+ ship within the US for free. Read more about shipping here.

Every Product is Guaranteed

We want you to order with confidence, in our products and in RAW Forest Foods, which is why we guarantee each product purchased through our store. Read more about our product guarantee here.

? Have a Question? Great, Ask Away!

You Ask Us Anything

But please remember that in following FDA rules and regulations, we are only able to answer questions regarding our products. This means we can't offer specific product recommendations.
Please Fill Out the Following